"30/30"
This page brings together the blog posts so it can be read in its entirety. Technical details are at the end for those who are interested.

I love the convergence of thought that a fixed "theme" provides when designing and am still waiting expectantly for the theme of the 2012 Fils et Metier Expo in Varaignes, France. So, I thought I would take an earlier theme, from the 2010 Expo which was simply "30", and see where it lead me compared to those who exhibited in 2010. http://www.filsetmetiers.com/expos.php
My first thought was, why couldn't it have been "20" as the title 20/20 vision came to mind, so how about 30/30? 30 degrees North, 30 degrees East? Where is that? Well actually it's in the desert in Egypt! So not much material to design around there...how wrong can you be? Totally! Because I discovered there is a 15 year old project called The Degree Confluence Project whose aim is to visit and photograph every degree intercesection of latitude and longitude in the w 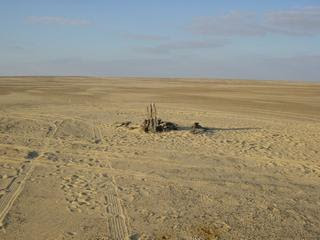 orld that is either on or in sight of land. Amazingly nearly all have been visited and photographed, including 30N 30E. Coincidentally, there was also a 4WD club in Egypt called the 30-30 Club whose aim was to get to this pont by vehicle and their tradition was to add a piece of petrified forest wood to a pile they created, and often to leave a message in a bottle...so it's not just desert, as you can see.

Here is the picture they took.

EARLY THOUGHTS
I already have an outline design. The main cloth pattern will need to evoke the shapes in the sand caused by the wind and maybe the sand particles themselves; fortunately, the regularity of sand c

The tyre tracks are also a feature I want to get into the main cloth. The cairn of petrowood? The messages?I want to "add" that in some way; maybe a 2 layer weave, maybe as a sculpted layer onto the cloth.......

I will have to change the colours though...need something more vivid so a desert sunset is probbaly more appropriate...here is a pic. of sunset in the North Sahara... I love the orange! 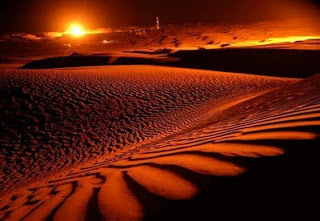 Sunset in the Northern Sahara Desert 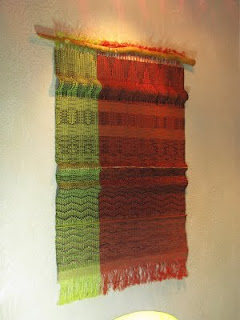 "30/30" - 32" x 44"
First stage nearly complete, sufficient to hang and photograph. This is just what I am calling the backcloth. I have yet to start the second layer, a narrower, vertically hanging piece that will go over the yellow/red vertical line.

I have managed to get the rolls to stay in the cloth whilst hanging for the dunes, though I think I may remove the upper one as it diminishes the impact of the set of tyre tracks below it. I have some lovely petrified wood, one piece of which I have incorporated into the top fringe to hang it. I am very pleased with it as all the patterns, sand, drifting & tracks, stand out really well from each other, and the raised cloth textures (not visible in the photo) draws you in to want to touch it.

The second layer will have several elements of 'transparency' to reveal the backcloth so that this 2nd layer reveals parts of the layer below. One key feature though will be the central warp yarn. This will be the same fancy metallic/wool yarn I used for the horizontal meridian line. The effect being to have the two meridians crossing; 30 lattitude and 30 longitude.

The loom woven pattern will be the tyre tracks, with the space in the middle having sections of unwoven warp; I will use 2 shuttles to preserve the central space. After seeing the expo, it has given me an idea as for what to do with this central space. I have worked out how, still on the loom, to weave-in a frame to the central section ( I can even do this in wood if I make sure its positioned so it does not have to go over the breast beam) whilst still being able to weave the pattern up the sides using the dobby to select the shafts. This will leave me with a 'framed window' with just warp threads inside it, like a miniature tapestry frame, surrounded by the loom-woven pattern. I can then use tapestry weaving to infill the frame or to make a transparent section to show through the layer below.

This is a nice juxtaposition of what can best be achieved on the loom with the tapestry weaving.

Second layer is warped at 10epi in a 10/1 bronze linen. Its an extracted section of the twill of the main cloth but woven as overshot. Ground yarn is the warp linen and the pattern is a 10/4 linen in steel grey. The set will result in weft faced as I chose the set to suit the requirements of the windows, not the cloth.  So I have woven this as overshot with double tabby ABxBAx to make more of the bronze colour come through. 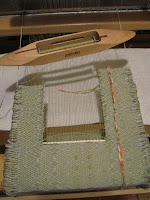 The second layer is on the loom and have finished the first of the 'windows' in this piece.
This is the transparent window behind which will be the bottle. It has a wooden frame piece top and bottom. Each side is 100 picks of pattern, woven seperately and beaten with a comb, so had to be careful with the weft packing to be sure each side was at the same level. 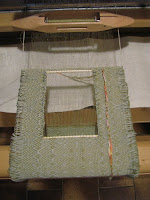 This is it with both sides finished, the top frame picece in place and the first few full picks woven

The unwoven warp is g 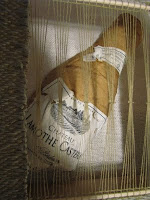 athered to allow the bottle underneath to be visible.

The close up shows it more clearly. This has worked out really well and the whole thing is perfectly stable and doesn't change when the tension is released as its a a 10/1 linen with zero elasticity. 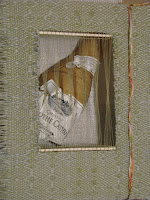 Now have to weave another 25cm before the next window, which will be a rigid 4 sided wooden frame so that the  free warps in the middle can be tapestry woven. 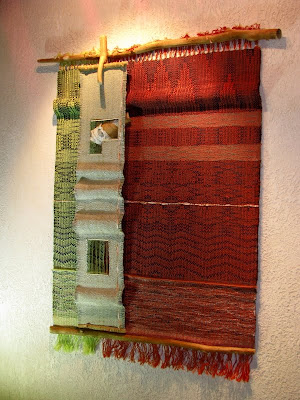 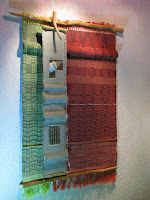 Well, here it is! Finished and o the wall under the spotlight...so to speak. I am very pleased with the finished result and, most importantly of all, it looks great on the wall :-)

I already have 2 pages of sketches for the next project...its working title is "Base Camp"...... and just in time, a weaving friend from Aubeterre gave us 3 huge bin bags of beautiful yarns, mostly lovely wools and some cotton, bamboo and silk.........may have to wait till after the wedding-of-the-year to begin that one.