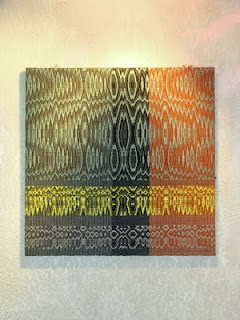 This is the second in the 3 piece set I have conceived and the first i will weave until I resolve how to do Ripples. It's warped and ready to go - here are the screen shots of the PCW design; it's an overshot so there will be a fine tabby in the actual woven piece.

I have always had this 'drum-sound' and 'lost civilisation' image for this piece. So I did some fascinating research into the ancient Mayan culture, for whom textiles was and still is a major part of their culture. Four key images recur in their textiles. Two of these were able to be designed into the piece using the threading I developed for the main image.

This one is the "earthlord", a key pagan image in Mayan textiles

And this one is "The Vulture"

The main pattern, which comes from the threading, is part of the theme in these pieces of 'waves' - in this case I want to give the feeling of intense sound waves. Mayans had, like most cultures, an important role for music and their music was based around purcussion, like drums and small wind instruments, like the Ocarina. This piece is DEFINITELY drums to me!! Big, wide sound waves!

It is on 8 shafts in overshot, likethe other two pieces (though Ripples will probably be done on more shafts)The finished hanging of Los Endos - 80cm x 80cm


DANCE ON A VOLCANO (OCARINA) 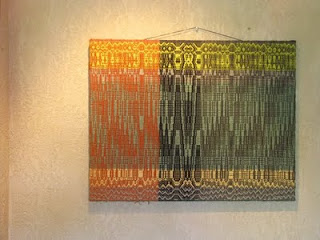 The second in the Mayan Music set is subtitled "OCARINA". The sound patterns I have used here evoke a more harsh, trill sound like the wind pipes used by the Matans, hence the title Ocarin