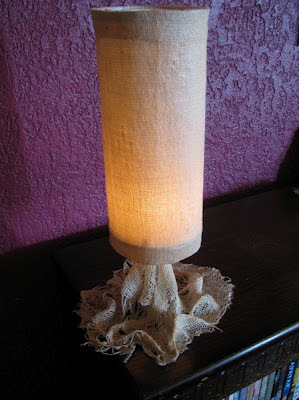 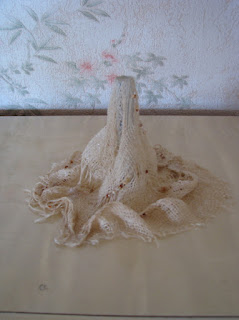 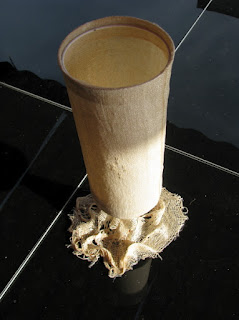 3 Images of  a 40cm tall table lamp in linen woven in Atwater Bronson Lace and formed into a 10cm tube.
The base is  linen woven on a very open set with varied weft spacing. Beads are woven in. The cloth was formed, wet, over the support post and vitrified. 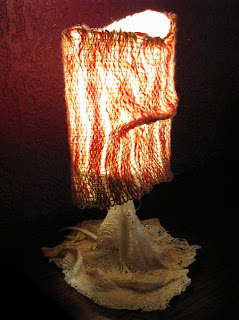 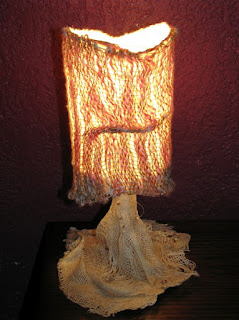 The first of 6 lamps to be woven in double weave.  I wanted to produce an open but stiff base layer for the lampshade structural material with a very open transparent top layer which I could shape and mould around the shade.  This first one has the second layer attached only at one end. This allowed me to roll it up out of the way whilst I vitrified the linen cloth into a tube. The rigid tube was then shaped and finally, I was able to unroll the top layer and curve and shape it before attaching its open end. 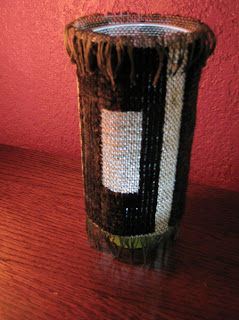 A self-supporting lamp shade that accepts
an electronic tea-light unit (a 3V 4x LED unit).
Woven double weave on same linen warp as the other lamps. The fringe top and bottom are vitrified; te bottom to allow the fring to support the weight of the woven tube. The 2nd layer is a chenille which is opaque allowing the base layer linen to glow with the light. 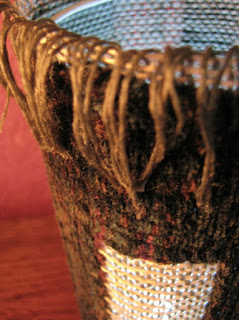 Detail showing the top fringe - I didn't want a 'twee' and neat fringe - so I clumped it together rather than combing it whilst still wet to give a 'bedragled, wet-look to the fringes.