My trial version of Photoshop only lasted 30 days so the full version arrived from Amazon today and I uploaded it. Despite what it said on the tin, after erasing the trial version it didn't bloody well keep all my pattern presets ( the files I took days creating and uploading which tells Photoshop how to assign weave structures to my designs) nor did it keep my network drafts; which for 32 shafts is a lot of work! So, my expo designs are now hovering in the ether akin to when Star Trek's transporter left molecularly-deconstructed low-ranking crew members in limbo whilst Scotty battles to fix it...usually they re-materialized as a jelly-like blob on the floor of the transporter room unless it was Captain Kirk or some high ranking inter-gallactic envoy........here's hoping I am more successful then Mr Scott and that my designs are not considered minions of the cast ;-)
Posted by Mike at 22:05 No comments: 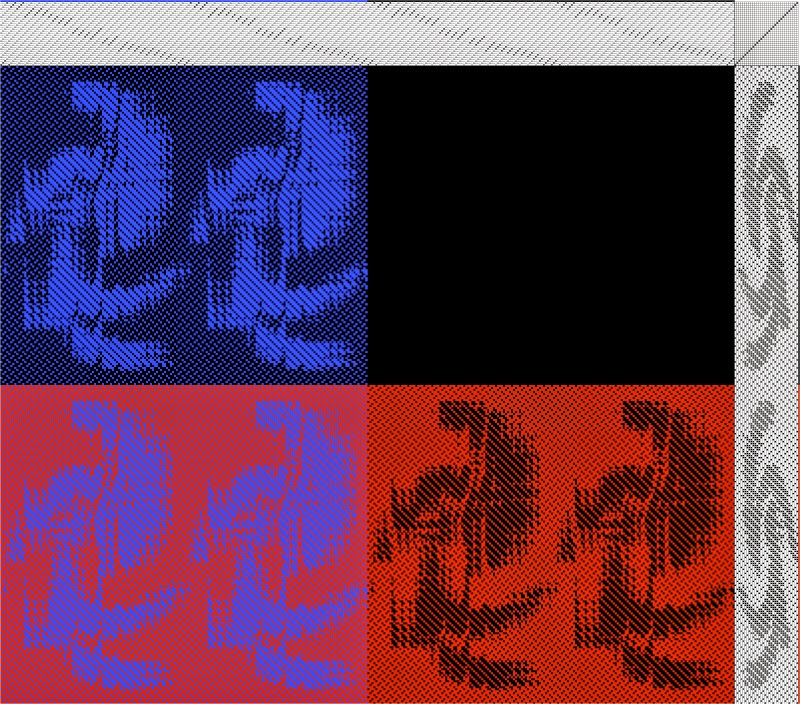 Here is the first draft of the panel for the Expo. Designed on Photoshop and generated in WeaveIt. The motif will change but this is the structure I want.

The panels at the moment are left-hand 3/1 twill with a background of broken twill, so the motif is warp-faced & will be in relief therefore the motifs will be visible in the black panel.  How visible I am not sure.
Posted by Mike at 11:29 1 comment:

Getting to grips with Photoshop

A week of learning Photoshop applied to weaving lift plans.  Alice Schien's book The Lift Plan Connection is basically a manual for Photoshop for those who want to use it's features to design lift plans. You have to make your own pattern presets for all the weave structures you want to use, but the process after that is sooooo quick. I can take a jpeg or bitmap picture, or something drawn on Paint or Photoshop and generate a 4 layer (which means 4 different weave structures if you want them) liftplan in about 2 minutes!
This one is only two layers, produced from a simple 3 line doodle followed by one of photoshops filters (twirl filter). layers are 3-1twill and broken twill - this is the lift plan pasted into WeaveIt.

Now I have set up half a dozen preset Network threadings in Weavit, it takes literally 3 minutes to go from the sketch to ready-to-weave.

Unlike designing in the weaving software (in the tie-up lift plan or  sketchpad) the 'weavability' of the final design in Photoshop is guaranteed, once you have done the ground work setting up the pattern library in Photoshop. From there, you have only to follow two weaving rules: don't mix  network initials that aren't mutiples of each other e.g. a 4 end with a 5 end; and avoid mixing weave structures that are disparate and fortunately there aren't many and they are pretty obvious even to a numpty like me. Then, a simple float search is all that's required in the weaving software after the wif has been generated.

In my teaching I have found that, invariably, anything that improves accessibility and promotes faster progression earlier in the learning process leads to engagement and better learning. If I were teaching weaving in my technology class to GCSE students today, this would be the tool I would use as the first step for students understanding of weave structures and designing their own. This is directly analogous to the huge leap forward in teaching that CAD provided: by directing it early at the novice they move much quicker towards being engaged in getting their ideas to fruition.

With the Exhibition theme of ' Tales and Legends' I have been thinking around the general theme of Good vs Evil, which pervades most fairy tales. I thought specifically of Snow White and the wicked Queen and  "Mirror, Mirror in my hand, who is the fairest in the land". Magic mirrors are also something that appear in may fairy tales and legends. 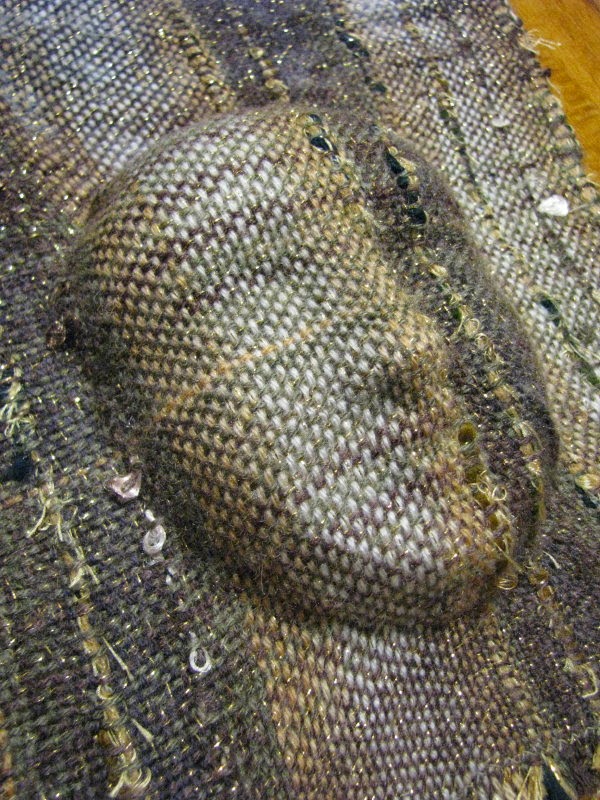 My title is "Mirror, Mirror!" and I am working on having two woven pieces facing each other, either in a frame or with a woven border that gives the impression of a mirror's frame. I also want each to be an 'opposite; either structure, colour or  pattern. I want it 3-D - so thinking of using the vacuum forming process so at the moment - first design is two, framed pieces with 'opposing' faces in relief - one serene, the other evil.

This is the test for the serene face, vacuum-formed in a spare, loose woven piece I did ages ago. It's very in-elastic (and rather thick/heavy) so with a more elastic weft, it shows me I can get a very 'high' relief without distorting the cloth. 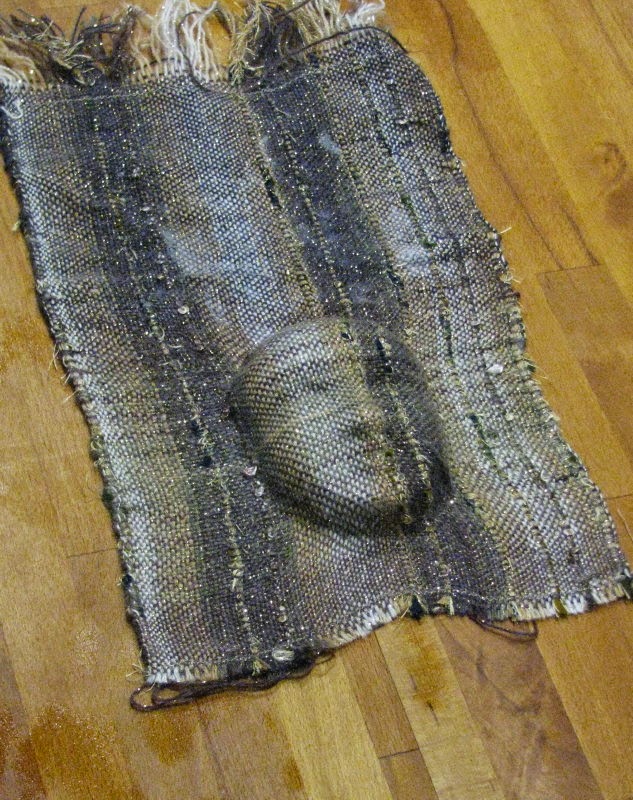 Viewed from a distance, the overall impression is clearer as to what it will look like on a wall. Now I have to work on the evil face; finding an approach that makes it clearly 'opposite'

I like the effect the light/dark on the face gives.
Posted by Mike at 20:53 2 comments: